On October 4th, the controversial media organization Wikileaks celebrated its 10th anniversary by announcing it would release millions of classified documents over the next ten weeks, many of which are expected to be related to the U.S. presidential election on November 8th.

Founded in 2006 by Australian computer programmer Julian Assange, Wikileaks has been at the forefront of the international discussion about how vulnerable our personal data has become in the digital age. There’s no denying that high-tech espionage remains a growing threat. Just ask Edward Snowden, a former CIA employee who is currently in hiding for leaking classified information about the National Security Agency, including a number of sophisticated ways to collect sensitive data, such as social security numbers, account numbers, passwords, and more.

Most of the general public is aware of the threat of cyber-attacks and the need to take proactive steps to protect their identity online. But even innocent people who maintain rigorous cyber security efforts may still be at risk from potential criminals who seek to steal data via other means. Wireless identity theft, for example, involves the use of surveillance equipment designed to intercept electromagnetic signals, which can provide hackers with covert access to desktops, laptops, fax machines, external disc drives, CD-R drives, scanners, printers and other high-bandwidth peripherals.

Banks, data centers, corporate offices and government buildings are all high profile targets for wireless identity theft given the amount of sensitive information stored in these facilities. And unfortunately, there’s very little that everyday civilians can do to protect themselves from a possible data breach. After all, they have no control over the level of cyber security and signal defense at these buildings.

Instead, the responsibility of protecting innocent people from wireless identity theft in these types of facilities falls on two groups of people: 1) the building owners who are in a position to make decisions regarding the addition of new security measures; and 2) the engineers and architects who design and construct these buildings (because they’re in a position to advise and educate building owners about the importance of signal defense).

The most affordable defense system against wireless identity theft

Fortunately, installing a signal defense system that will protect a building that stores sensitive or classified information (or more accurately, the customers, tenants, employees and/or associates who frequent it) from wireless identity theft is now a fairly simple process. When it comes to signal defense, the most vulnerable part of a building is its windows. Regular windows offer zero protection from both incoming and outgoing electromagnetic waves. This means that anyone outside the building who has the proper surveillance equipment can steal sensitive data from virtually anyone inside – unless the building is protected by a window defense system.

Unlike traditional window installations, the CyberWAL system is installed on the interior of your building, which not only saves you the cost of removing the original windows, but also provides additional insulation that seals the building envelope to increase thermal performance and temperature comfort levels. The CyberWAL system has been proven to save building owners up to 20% on their annual energy costs.

The importance of a reputable 3rd party test report

Before choosing any kind of security system, it’s always prudent to be sure it’s been vetted by a reputable, unbiased 3rd party organization. This is especially true for signal defense.

In July 2016, one of the leading cyber security labs in the country (endorsed by both the National Security Agency and the U.S. Army) – conducted a RF Shielding Effectiveness and Infrared Letter Test Report to determine the precise effectiveness of the CyberWAL system.

The RF Shielding Effectiveness evaluation was performed on one sample of Thermolite CyberWAL 2.0 Glass in accordance with the “Standard Test Method for Electromagnetic Shielding Effectiveness of Glazings” as set by ASTM International, a not-for-profit organization that provides a forum for the development and publication of international voluntary consensus standards for dozens of industry sectors.

The goal of the report was to determine the level of signal attenuation, or, in other words, how effective the CyberWAL system is at weakening the strength of both incoming and outgoing electromagnetic signals. The higher the attenuation, the weaker the signal. As mentioned earlier, normal untreated window glass offers no signal attenuation, leaving you vulnerable to outside RF and IR surveillance equipment.

The ASTM RF Shielding Effectiveness Requirements state that window treatments must provide an average of at least 38 dB of RF attenuation between a pre-established range of frequencies. The CyberWAL 2.0 glass test results revealed that, when the antenna was in the horizontal polarization, the RF Shielding Effectiveness was an average attenuation of 39.5 dB over the same frequency range, providing a slightly higher average attenuation than the requirement.

The ASTM IR Attenuation Requirements state that window treatments must provide at least 20 dB of IR attenuation between a pre-established range of frequencies. The CyberWAL 2.0 glass test results revealed in the Infrared evaluation that the test sample met the 20 dB attenuation requirement. 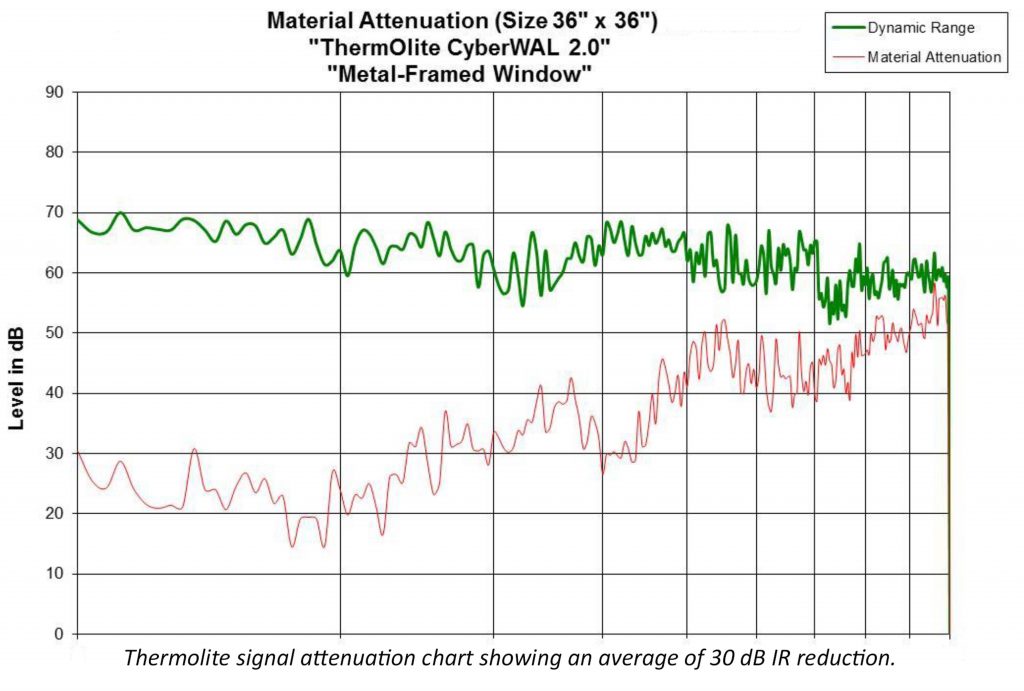 A call-to-action for engineers, architects, building owners and government officials

Whether it’s customer account numbers, passwords, trade secrets or governmental data, wireless identity theft is a dangerous threat to the world – especially because it’s not the kind of threat that everyday civilians can easily defend themselves against. They have no say in how their sensitive information is safeguarded in a data center. That’s why it’s important for engineers, architects, building owners and government officials to stay informed about the dangers of wireless identity theft and the most effective ways to combat it. Any organization or agency that handles sensitive and/or classified information should consider adding a signal defense system to their facilities, or at the very least, learning more about them.

One final note: you may have noticed that we’ve omitted the specific frequency ranges used in the RF Shielding Effectiveness and Infrared Letter Test Report from this article. We’ve done so to prevent such valuable analytics from being readily available to potential hackers and cyber criminals. That said, this information is helpful in fully understanding both the dangers of electromagnetic interception and the benefits of a strong signal defense. For this reason, the precise metrics used in the test report are made available to individuals, businesses, government agencies and other entities upon request after proper verification. To receive this confidential information or to learn more about the CyberWAL window defense system and the overall threat of wireless identity theft, call 574-234-4004 or contact info@thermolitewindows.com.